Chad is largely dominated by Lake Chad Basin, a vast topographical feature in which much of its population resides, as well as the Sahara Desert. Like its neighbors, Chad is among the hottest countries in the world. Chad's arid, remote environment, far from oceans and seas, and its location bordering many different cultural spheres have greatly affected its history. Although today one of the poorest countries in the world, Chad was once home to the legendary Sao civilization and is an African archaeological cradle.

Conquered by the French in 1920, Chad's political landscape gradually deteriorated in the ensuing decades and the French ultimately lost effective control of the region. Chad became independent in 1960. Fifteen years later, the country teetered on collapse after one-time president turned autocrat, François Tombalbaye, was assassinated. In 1979, the government foundered and Chad fell into anarchy. Bitter fighting against invading Libyan forces that year brought Chadians together anew. In 1987, the Libyan military retreated following decisive losses in the Toyota War which saw Chad successfully expelling Libya from its territory.

Chad has been governed since 1990 by President Idriss Déby, who fought against the Libyan military in the Toyota War. Several rebellions and attempted coups have occurred during his administration and Chad has struggled to gain economic footing. In 2003, oil exploration began, uncovering several profitable reserves. Today, petroleum is Chad's sole export of significance although most Chadians work in agriculture. In 2003, a worsening humanitarian situation in neighboring Sudan spilled over into Eastern Chad. 200,000 Sudanese refugees have taken shelter in Chad, fleeing from violence in Darfur. Additionally, civil conflict in Eastern Chad has displaced over 172,000 Chadians. 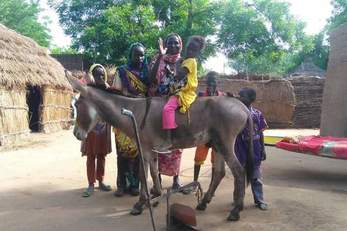 Chad
Donkey Ripples is a refugee-led, income-generating opportunity that empowers families living in Goz Amer, a refugee camp in eastern Chad, to meet the needs of their children while increasing thei...
2017