Namibia is one of Sub-Saharan Africa's most economically prosperous countries, in possession of a nearly $18 billion economy based on manufacturing, the mining of precious metals, tourism, and banking. The country, mostly arid and semiarid, is home to the Kalahari Desert, one of the largest African deserts outside of the Sahara, as well as the coastal Namib Desert. Predominately dominated by Bantu peoples, Namibia's population also features non-Bantu ethnicities such as the San, Europeans and their multiracial descendants, and a number of other smaller distinct tribes. Namibia's developmental success, however, is severely compromised by its extreme levels of inequality. Formerly a German colony and later a repressive apartheid state dominated by a white minority, Namibia's disparities have a rooted historical basis. Although the country secured its independence in 1990 and did not see the widespread political violence of neighboring Angola after establishing its sovereignty, there remain a number of complex social and economic issues in Namibian society.

Nearly 30% of Namibians live in poverty. Much of the country's wealth is controlled by a small economic elite and enormous variations in quality of life can be seen region to region, particularly between Windhoek, the capital, and rural areas.

The San, a collection of related indigenous peoples whose residence in Namibia predates the settlement of later Bantu peoples, have increasingly faced displacement from their land and government restrictions prohibiting them from pursuing their traditional subsistence activities. They are severely marginalized and face discrimination in spite of being one of the most ancient extant populations in the world. 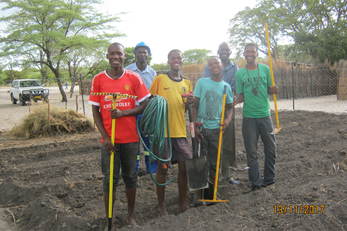 Namibia
Omega III is an impoverished rural community in a remote corridor of Namibia. The Ndoro Memorial Combined School serves the village's children. This school population consists of the Khwe-San spe...
2017